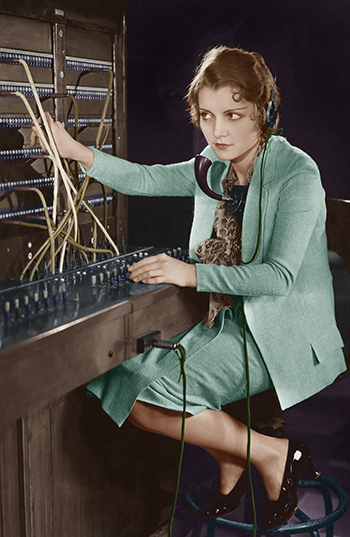 Anyone contemplating an upgrade will most likely install an IP based phone system, while those with traditional systems will likely be required to eventually transition to this new technology.

An understanding of some of the delivery elements will contribute to a successful implementation.

A phone conversation uses the same amount of bandwidth in both directions. The bandwidth required to support 4 concurrent calls with a budget of 80 kbps is about 320 kbps (0.320 Mbps), which is about half of the upload capacity of a solid DSL circuit. A cable or fiber internet connection can provide a great deal more capacity, but the voice call is only one part of the bandwidth equation. You will need to consider all of the functions on your network requiring concurrent use of the internet. Other activities like web surfing, email, security cameras or terminal sessions all need space in the bandwidth pipe.

Even with plenty of bandwidth there will always be a need to download a video or send an email with a large attachment. The bandwidth must be managed through the network to prioritize Voice traffic. With videos or large attachments, data packet transmission is not critical, if a packet is delayed or must be resent, it eventually arrives in your download folder intact. On the other hand, a phone conversation needs packets delivered on time and in the right order. An interruption in voice packet transmission will result in missing fragments in the conversation with a large gap dropping entire words or sentences.

This is where the router plays an important role in managing the flow of data by prioritizing the voice packets over all other traffic. Higher quality routers offer greater control of both inbound and outbound traffic, but you don’t need to spend hundreds of dollars to manage this aspect of your phone system.

Most small business networks are configured to work with up to 254 IP addresses. Best practice suggests phone systems are managed on a separate VLan (Virtual Local area network), but it is not uncommon to see phones added to an existing network. Including phones on an existing subnet will typically double the number of IP addresses needed.

Doubling the number of IP addresses does not mean you will require more cabling. Most phone sets have a pass-thru port allowing the network cable to plug directly into one port and a second cable plugged into the pass-thru port, linking the connection to your computer. New cable will be required in all locations where a network cable is not available. This typically happens when replacing a visitor phone that does not have a computer nearby. Alternatively, if a network cable is not practical, there are ways to provide phone service over traditional phone lines. .

Power to the Phone

Traditional Nortel phone sets were powered from the main phone system and did not require an individual power source. New IP phones obtain power in one of two ways: either from a POE (Power over Ethernet) enabled switch, or from a local wall outlet power supply.

Echo and volume issues are most commonly encountered on IP phone systems where traditional analog phone lines are used. Echo is typically handled by the analog phone line interface. When properly equipped and configured, the card should analyze and compensate for the echo within the first second of a conversation, after which it should not be an issue.

New IP based phone systems may not have the same signal tolerance as your former phone system. This could result in low volume on calls especially when the customer is located at the far end of the CO (Central Office) service area. PRI circuits provide good quality digital signals that preserve voice quality to both ends of the conversation.

Uninterrupted power is important to maintain a phone conversation during even the briefest power outage. Each device your conversation passes through should be checked for UPS power. This includes the phone system, switches, routers, and phone sets. Some areas are not critical, but key locations include executive offices and boardrooms.

Although it is possible to provision these devices through the phone system most alarm monitoring firms prefer to use Bell lines. Cellular backup is a good idea for any system regardless of which service is used for primary alarm reporting.